One of the original X-Men, Hank McCoy is a genius whose mutant ability gives him a blue and furry beast-like appearance.

With over 80 years of comic book history, Marvel has become a cornerstone of fan collections around the world. With the Marvel Legends Series, fan-favorite Marvel Comic Universe and Marvel Cinematic Universe characters are designed with premium detail and articulation for top-of-the-line poseable and displayable collectibles. From figures to vehicles to premium roleplay items, the Marvel Legends Series offers elite character-inspired products for Marvel fans and collectors. Additional figures each sold separately. Subject to availability.

Copyright 2018 MARVEL.
Hasbro and all related terms are trademarks of Hasbro.

• Ages 4 and up.
• WARNING: CHOKING HAZARD-Small parts. Not for children under 3 years. 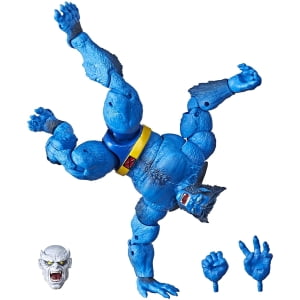